I am Fr. Joe Corel and am happy to be with you. A little about me: I was born in Naperville, IL and when I was five years old my parents, Jim and Mary Corel moved my brother Chris, 2 years older, and I to Earlville, IL. I stayed there until I graduated in 1989 and went to Culver-Stockton College. I went with the intent to graduate with High School English; I graduated with Elementary and Special Education. All through grade school, high school and college I believe the Lord was calling me to priesthood, but I fought the call. After graduation from college I agreed to try the seminary. I applied for the diocese of Jefferson City, same diocese as Canton, MO where Culver-Stockton is. Was accepted, went to Conception Seminary College for two years as a pre-theologian (a program for seminarians who already have a college degree.) Then, four years to Kenrick-Glennon Seminary where I fell in love with God's calling me to priesthood. On June 3, 2000 I was ordained to the priesthood. I served my first associate pastor position at St. Peter in Jefferson City; followed by a year at Cathedral of St Joseph. My second year priesthood, I was assigned to Catholic Chaplain at Missouri State penitentiary. In my third year priesthood, I was assigned to Immaculate Conception in Loose Creek and St. Louis of France in Bonnots Mill where i continued as Catholic Chaplain including the move to Jefferson City Correctional Center. In 2006, I was assigned full time vocation director where I served for nine years, the last two of those years with additional responsibilities as interim director of Catholic Schools. In 2015, I was named Vicar General and pastor of St. Andrew in Holts Summit. I remained as Vicar General until Bishop McKnight was named Bishop, then I was named Vicar for Prison Ministry and continued for one more year at St Andrew. I look forward to being insolidum with Fr Mark and Fr Dave as together all of us, the Catholics of Pettis County rely on the Holy Spirit to guide us on this beautiful journey. 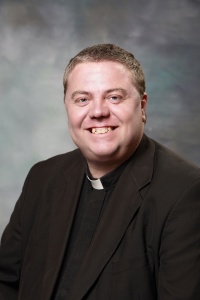